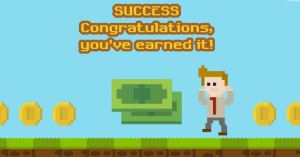 Plenty of new graduates are more than happy to take a lower salary than they might have wanted to get their first foot on the career ladder. Six months down the line, once they’ve proved themselves to be a valuable addition to the company, those same graduates usually aren’t quite as happy. You might think you need to switch jobs to get a salary that you rightly deserve, but there could be a more straightforward way to get a better salary: asking for a raise.

That might sound easier said than done: asking for a raise can be scary, while actually having to negotiate can be terrifying. This guide from our friends at Adzuna reminds us that negotiation is pretty much a game, and if you follow the rules of the game you should be entitled to a high score – and a bigger paycheck.

GAME ON or GAME OVER?