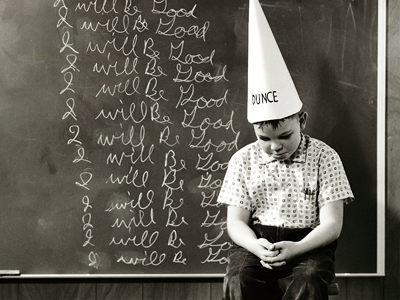 We all make mistakes. We’re human. Those little “oops moments” can either break you or make you into a better person. Which will you choose?

I recently screwed up at work. Yes, I’m admitting it. I messed up. It wasn’t anything that would be considered gross misconduct, but it was a screw-up nevertheless. In my life and career, I’ve taken risks that didn’t pay off and I’ve made audacious decisions without thinking about the big picture. I’m getting to the point…

You see, some of those decisions throughout my life got me into trouble. In school, I was called to the Principal’s office. In my career, guess who called me? My boss. I’ll come back to this in a bit.

In my experience, I’ve learned that there are four things a person can do to recover from a screw-up at work:

Own up. Never lie. Lying about what you did NEVER gets you to a better place. In fact, it does quite the opposite. When you mess up at work, own up to it. Accept the fact that you’ve made a mistake and acknowledge the problem. The blame game only makes it worse.

Listen to feedback. Listen. You have two ears and one mouth for a reason – listen twice as much as you talk. Be receptive to feedback and learn what you can do better next time. You have to own up to your mistake first, hence the ordering of the points in this post. Most people want others to succeed, so if they have a suggestion for improvement, listen.

Move on. Accept that you’ve made a mistake, listen to feedback, and then move on. There is no sense in dwelling on the past. You can’t change what you’ve done. The past is in the past. Take the feedback you receive and move on to a better you.

Don’t repeat. I said earlier that we all screw up. We do. Why? We’re human. At one time or another, we’re going to mess something up. It happens. But, we should learn from our mistakes. Don’t be afraid to fail, but remember to learn from those failures. Even a cartoon coyote knows the importance of this. Don’t make the same mistake again.

I think parents, teachers, and bosses all have one thing in common: they want you to SUCCEED. I know this has been true in my past, is true today, and will continue to be true in my future. Learn from your mistakes, own up, listen and move on. That’s it. It sounds simple, right? That’s because it is! You might not need these words of advice today, but sooner or later, they’ll come in handy. It’s okay to screw up. Just don’t make it a habit and don’t make the same mistake again.

What are YOUR tips? Is there anything that you would like to share regarding a time when you messed up and learned from it?

2 thoughts on “Recovering From a Screw-Up at Work”